Cupping: What were the marks on Michael Phelps' back? 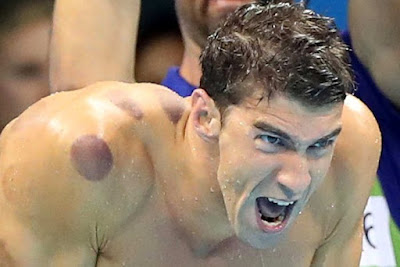 When US Olympian Michael Phelps jumped into the pool this week in Rio, it wasn't just his 19th gold medal that made headlines.
Phelps had large, circular bruises that covered his back and shoulders, causing some to question whether they were the result of a paintball session or perhaps falling asleep on all his medals.
But as it turns out Phelps is a fan of cupping.

It is an ancient therapy, said to be used in ancient China, Greece and Egypt, where glass or plastic cups, sometimes heated, are applied to the skin.
They are usually placed on the back or arms or legs and either heated or pumped to suck the skin into the cup.
In most cases a flammable liquid is put into the cups to create suction.
Some therapists move them around on the back, other leave them on the skin untouched, before taking them off.


What does it supposedly do?

It is said to promote blood flow and bring toxins to the surface of the skin.
People undergo the treatment for a range of health issues including muscle tension, arthritis, sleep issues, fertility problems and pain relief.
However Australian Acupuncture and Chinese Medicine Association vice president Waveny Holland said the use of cupping was up to the practitioner, and not generally used for specific medical ailments.
"It's not a blanket thing like Western medicine," Mrs Holland said.
"Practitioners will treat their patients according to their specific needs.
"Cupping isn't generally used for headache or infertility ... it would be on the practitioner's diagnosis and assessment that they will choose the right treatment for that person."


What about the bruises?

Well, Mrs Holland said her training taught her not to leave any bruises after a cupping treatment.
"For me again, I use it sliding (the cup) and that's like doing a deep-tissue massage without leaving the marks," she said.
"You don't put them over broken skin at all or anything like that.
"You don't want to cause any more bleeding."


Why do athletes do it?

It is said to help improve recovery and promote blood flow.
"I'd be interested to know whether they are Chinese medicine practitioners, whether their professionally trained or whether they're just practitioners who think that cupping might be good thing to do," Mrs Holland said. 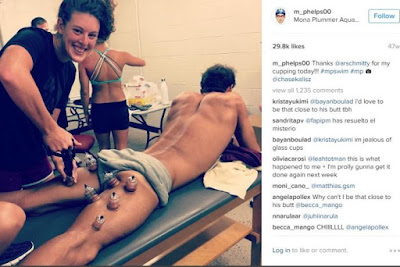 US gymnast Alexander Naddour is also a fan.
He told USA Today that it was "better than any money I've spent on anything else".


What does science tell us?

Not much, according to Australian Medical Association vice president Dr Tony Bartone.
"What I can say is that cupping has, from our perspective, no medical benefit whatsoever," Dr Bartone said.
"There is no evidence to suggest — not proven evidence — to suggest that it has a role to play."

Well, it can be.
"Well look ... the theory is it is using a suction to draw ... toxins out of the blood to the surface [and] the pressure, that creates bruising beneath the skin," Dr Bartone said.
"You're breaking ... capillaries... that bruising or bleeding may be extensive and may create deep bruising within muscle which may, in really bad cases, could create some deep scaring or nodules.
"Because some practitioners use heat ... burns are not an uncommon consequence of cupping, not to mention the impressive bruises that are visible for all to see."


So, should you avoid Chinese medicine?

Not necessarily. Dr Bartone said cupping was "one of the more extreme ends" of Chinese medicine.
"Acupuncture has got a role to play," he said.
"It's used by many leading pain management clinics.
"[Cupping] just unfortunately doesn't stand up to the same rigour of scrutiny."
Mrs Holland said it was important to seek out professionals with proper qualifications.
"There's a lot of controversy going around Chinese medicine," she said.
"Chinese medical practitioners have to have a minimum of a four-year bachelor degree [in] Chinese medicine to be registered and practice and we've got to maintain our professional development every year to maintain that registration to practice.
"The national law is supposed to protect [the public] from people who are not properly trained."

Posted by myacupuncture at 18:32 No comments: